I can’t believe it has been over ten years since the first version of the Raleigh Audio Line Stage saw the light of day. It hasn’t changed much and it has changed greatly – this seeming contradiction means that the basic concept is the same but the implementation has been constantly improved through literally hundreds of hours of experiments and subsequent enhancements.

But I don’t want to have all of the fun – since I know that many of you are DIY enthusiasts, I want you to share in the experience of developing a superb audio system. To that end, I have structured the Raleigh Audio products into two categories. First is the “Premium” version which has benefited from all of the many hours of experiments and subsequent enhancements. Second is the “Standard” version which offers the basic, functional, design without all of the enhancements. This gives you the opportunity to experiment and find the changes which you like best. An added benefit of the Standard version is that, because most of the enhancements are more expensive, the Standard version is cheaper than the Premium version.

So let’s take a look at what we have in the line-up for the Line Stage and Extreme Preamplifier.

The Extreme Preamplifier consists of an attractive enclosure containing two sections; an analog input selection stage and a differential line stage (described below.) The analog input selection stage provides the circuitry to interface with both single-ended RCA jacks and balanced XLR jacks, and relays to connect the selected input to the differential line stage.

The Extreme Preamplifier has six relay-switched inputs: four unbalanced (RCA) inputs and two balanced (XLR) inputs. There are two outputs; one RCA and one XLR outputs; that are switch-selectable to be either balanced or unbalanced. Note that the two outputs are not isolated from each other, so you may not be able to use them simultaneously and preserve the balanced operation of amplifiers being driven from the XLR/balanced outputs.

Two versions of the Extreme preamplifier are available – a Standard version and a Premium version. Both versions are available either as kits or fully assembled and tested.

The Standard Extreme Preamplifier is intended as “entry-level” product that competes favorably with well-respected products selling in the retail high-end audio market for $3000-$4000. Furthermore, a Standard Kit is upgradeable to the sonic equivalent of the Premium Kit if you should choose to do so later, so your purchase is not a “dead-ended” investment.

The Premium Extreme Preamplifier provides a high-end preamplifier comparable to the best on the market. 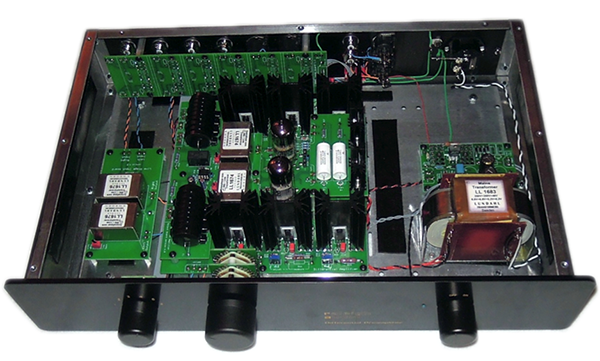 Board Kits and Options

For the DIY enthusiast who wants to build his own preamplifier, we have the parts to enable that endeavor – again in the two versions, Standard and Premium, to meet your needs.

This differential class-A triode parafeed output stage is a further refinement of the circuit, now in its fourth generation, first used in the excellent Raleigh Audio Line Stage detailed in the November 2004 issue of AudioXpress. The circuitry is fully balanced from input to output, accommodating both balanced and unbalanced inputs and outputs.

The output section of the Line Stage provides a transformer-coupled circuit in a bridged parallel feed configuration that was used by Western Electric over 60 years ago. However, it employs a cascode connected depletion mode MOSFET constant current source (CCS) that is more effective than anything available to Western Electric engineers. The amplifying device is a robust Russian dual triode, one per channel. A Lundahl transformer in each channel provides for both balanced and unbalanced outputs.

The Line Stage provides an interface for a volume control. Either a standard 10K to 50K stereo audio potentiometer or K&K Audio’s shunt attenuator can be used to control the volume. An optional volume control (not included) has also been accommodated (see Stepped Shunt Attenuator below).

Advanced Minimal Reactance Power Supply circuitry is incorporated into the Line Stage board is designed to work with a Lundahl LL1683 power transformer.

A 12VDC, 65mA, power supply is required to power the relay on the Line Stage board. 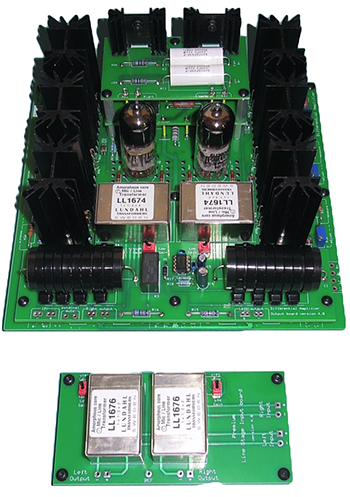 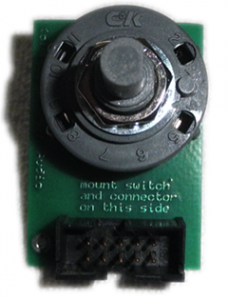 Analog Input Board and Select Switch

The Analog Input board provides for the selection of six stereo inputs – four single ended and two balanced. Inputs are selected by high-quality audio relays and the relays are controlled through a ribbon cable by a switch, intended to be mounted on the front panel. A 20″ ribbon cable is included and you must provide your own mounting hardware, input jacks and knob for the switch. Since this is rudimentary support circuitry, only one version is offered without the Standard and Premium differentiation.

The Analog Input board can be seen mounted on the inside of the back panel in the picture of the Extreme preamplifier above. 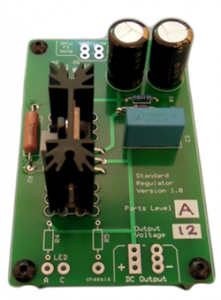 This Standard regulator board is designed to provide the voltage needed to operate the relays used in the Line Stage and Analog Input. It requires a nominal input of 6.3VAC.

Since this provides only relay power and does not contribute to the quality of the audio reproduction, the Standard regulator is used for all versions of the Line Stage.

With the purchase of a Line Stage : FREE!

Those of us who are using differential tube preamp circuits like the Raleigh Audio active output stages or Lynn Olson Raven-style preamps have had to use conventional audio potentiometers or their discrete resistor analogues, like the DACT or Goldpoint controls to provide control of volume. You can review the choices for volume control implementation in these types of preamp circuits below.

We prefer the implementation with one variable element per channel, the so-called “U” or balanced shunt attenuator. It is simpler and cheaper and has the significant virtue of causing no change in common mode rejection as different volume settings are used.

So what is special about our implementation of the “U” attenuator control? A standard audio potentiometer or discrete resistor analogue has a resistance profile (called a “law”) that is configured for standard series attenuator use, not shunt attenuator use. You will probably have to trust us on this, but the math is not the same. Hence, when you use a smallish value of series resistance and a large value audio pot to make a shunt attenuator that won’t cost you very much lost gain in the maximum volume position, you will get a control where most of the volume attenuation capability is in the first third of the rotation from zero volume to maximum volume. That’s not really what you want, obviously. To fix this situation you can use a series resistor value that is approximately the same value as the pot and now the shunt attenuator performs more reasonably, so that attenuation is spread more evenly over the rotation of the pot, but you lose a fair amount of gain at maximum volume setting. (approximately 10dB in the case where the pot is the same value as the series resistors). Compromises, compromises…..

To avoid these compromises, we have designed the resistor values used for the stepped control to provide equal dB volume intervals (1.5dB) with 5K series resistors, which result in a reasonable 10K input impedance at minimum volume setting. Of course, any kind of volume profile can be implemented with discrete shunt resistors, however this one has proven to be useful for me for the 2 years I’ve lived with such a control (implemented in my case with a much bulkier (and slightly inferior sounding) array of Holco resistors). To be fair, there is a compromise inherent in these controls, too; that is price. Using Seiden 32NEG switches specially imported by us for this purpose, these are not inexpensive, but are reliable, sound excellent, and have a wonderful “feel”. In my experience, no audio potentiometer provides the sound quality that these stepped attenuators do.

Note that you can also utilize these attenuators in single ended circuits with a single 10K series resistor per channel without any other changes.